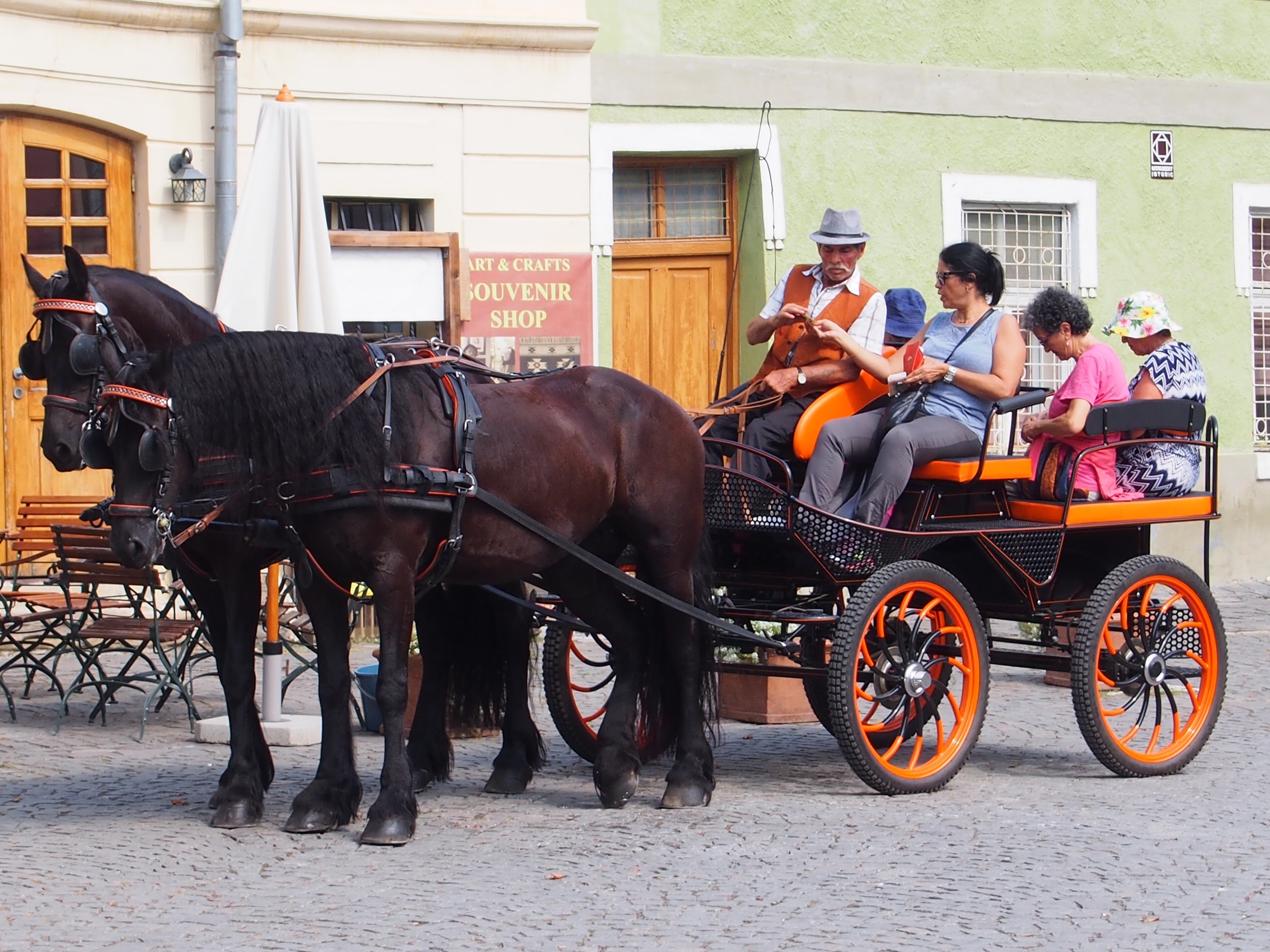 Day 1
After the airport arrival, you will meet our tour guide and then you will be transferred to the hotel.
Free time to visit the city, then in the evening you can have dinner in a local traditional restaurant (Jaristea, Caru cu Bere, Burebista, Hanul lui Manuc).

We will walk down the historical area of the city of Bucharest, where you can see the cobble stoned streets and the old beautiful houses with outstanding design. Terraces on both sides of the streets invites you to step inside.
Only visiting the old town you can understand why Bucharest was once called “The Little Paris”.
A particular interest represents a building which recalls bad memories to the Romanian people: Palace of the Parliament (People’s House), the second largest building in the world, after the Pentagon, built at the order of the communist dictator Ceausescu.

You cannot miss Muzeul Satului (The Village Museum), where you will find almost all the traditional art collections, rural houses, and more about habits of each region of Romania.
Also you can admire the “Arcul de Triumf” – a monumental gate which commemorates the victory of the Romanian army in the World War I.
Optionally you can dine in one of the restaurants in town, with traditional Romanian food.

Day 2
After breakfast, at 09:30 we will start our journey toward Brasov. On our way, we will make a stop at the famous Peles Castle in Sinaia, which was once the summer residence of the Royal family, known for its great architecture. Along time, the castle hosted many personalities of the times: writers, musicians, kings and queens. Time for visiting: 2 hours.
We can have lunch at a restaurant in Sinaia or we can continue our way toward Brasov, a city full of history and mystery. Medieval catacombs, secret tunnels, passages for hiding food under Piata Sfatului (Council Square), the vast lake beneath Tampa’s Mountain, and Solomon’s treasure, are the most popular myths of Brasov. These myths have been told over the centuries by word of mouth, generation after generation, until nowadays.
In the evening we can take dinner at a restaurant in town or at the hotel (optional).
Brasov accommodation.

Day 3
After breakfast, at 09:30 we continue our visit in Brasov with other sights: Black Church, The Council Square, The White Tower, The Black Tower, The Smith’s Bastion, The Weavers Bastion, and “Poiana Brasov”. After this we head towards Sibiu.
The legend says that Sibiu (or Cibinum) was once a poor village, where people were living from day to day. One day, a skilled craftsman came into the city. The local inhabitants were satisfied by his work, and they proposed to give him a piece of land, in order for him to stay. The sly merchant said that he will accept as much land as his buffalo skin can comprise and the villagers agreed. He cut thin strips of leather, covering a very large area of land. As the citizens of Sibiu are trustworthy people, they accepted the deal at the end of the day. With this piece of property the craftsman contributed to the village development, as he brought there other handicrafts-men.

Historically speaking, Sibiu is known before the year 1200 a.c., after being colonised by the Saxons, and named “Hermannstadt“. It was declared town in 1366.
The legend intertwines with history, and from the XII century, many Saxons came, most of them artisans, later organised themselves into guilds, contributing to the welfare of the city.
We recommend you a 2 nights staying, to discover as many attractions.
Accommodation in a 3* pension in Sibiu, or in the surrounding, time at leisure, dinner at the guesthouse or in a restaurant.

Day 4
After breakfast, at 9:30 we can visit the largest outdoor museum in Europe (100 hectares) – Ethnographic Museum Astra – museum of Saxon ethnography and popular art, and other attractions: The Grand Square of Sibiu, Brukenthal Museum, Evangelical Cathedral, Orthodox Cathedral, The Roman Catholic Church, The Bridge of Lies, The 8 towers of Craftsmen.
We recommend you to serve lunch in one of the traditional Saxon restaurant.
Sibiu accommodation.

Day 5
After breakfast, we will begin our new journey toward Maramures. Traveling time: 6 hours. We’ll make a stop on the way, for lunch.
As historical area, Maramures is somehow a land kept away from the struggle of the battle for tomorrow. It is inhabited by very hard working people,which are still wearing the national clothing, proud to belong to these regions. When you get here for the first time, as a tourist, the locals will welcome you with great hospitality. Baia Mare or Sighet accommodation. Time at leisure.

Day 6
After breakfast,our trip continues to Sighet, where we will visit the “Pain Memorial”, a political prison where were tortured those who resisted the communist regime. Even today, after more than 50 years since it’s no longer used as a prison, you can easily imagine the pain, deprivation and suffering endured by those who were incarcerated here.
In our journey, we’ll go to the Happy Cemetery Sapanta, a major touristic attraction, unique in the world, showing the ability of the peasants to preserve and respect the ancestor’s image, through wisely written quatrains.
On the way to Borsa, we can visit several traditional villages in Maramures like: Poienile Izei (famous for the only church in the world who has, right on the front door a picture with the devil), Botiza ( known for the popular costumes of the locals), and Barsana Monastery (located about 20 km from Sighetu Marmatiei).
In Maramures you can take a ride with a steam train called “Mocanita”, leaving the town of Viseu and for a length of about 60 km, on a narrow gauge (distance between rails), crosses Vaser Valley forest area, one of the most spectacular, beautiful and wild valleys from Romania.
After the ride with “Mocanita”, it is a must to stop at a restaurant for having dinner and taste the local food, and you cannot miss “horinca” (the traditional alcoholic drink).
Borsa accommodation.

Day 7
After breakfast, at 9:30, we will visit Sighisoara, the only medieval citadel from Europe inhabited even today. Wandering through the city, stepping on the narrow streets paved with river rock, admiring the colourful roofs of the houses, shining under the sun.

From the upper platform, the walls and towers of the fortress creates a gloomy, but haughty image. In times of peace they were opened to receive passersby, and in times of war they were closed, protecting the citizens.
Sighisoara is the best preserved medieval complex in Europe.You can admire the city from the Clock Tower.
Lunch in traditional restaurant.
Sighisoara accommodation, in a 3*pension.

Day 8
The last morning in Romania, try to enjoy every moment of it! We wake up and serve breakfast and a strong coffee. After a short walk, we leave Sighisoara, and return to Bucharest. But we cannot leave these places without a stop at the Royal Court in Targoviste where the famous Vlad Tepes, also known as Dracula, began his reign. Among the first and most bloody acts of the prince, we remember the revenge plan against the nobles of Targoviste, responsible for the death of his father and brother. On an Easter Sunday in 1459, he arrested all the noble families who participated on a party in his honor. The oldest were impaled and the others were forced to walk on foot, a hundred kilometres road, to Poenari. They were forced to build a fortress on the ruins of an ancient outpost overlooking the Arges River.
We return to Bucharest, hoping that you enjoyed the tour and you will return for other destinations.

Tours are organised for groups of minimum 20 persons.