After the airport arrival, you will meet our tour guide (fluent in English, French, Italian, etc) and then you will be transferred to the hotel.
Free time to visit the city, then in the evening you can have dinner in a local traditional restaurant (Jaristea, Caru cu Bere, Burebista, Hanul lui Manuc).
We will walk down the historical area of the city of Bucharest, where you can see the cobble-stoned streets and the old beautiful houses with outstanding design. Terraces on both sides of the streets, invites you to step inside.
Only visiting the old town you can understand why Bucharest was once called “The Little Paris”.
A particular interest represents a building which recalls bad memories to the Romanian people: Palace of the Parliament (People’s House), the second largest building in the world, after the Pentagon, built at the order of the communist dictator Ceausescu.
You cannot miss Muzeul Satului (The Village Museum), where you will find almost all the traditional art collections, rural houses, and more about habits of each region of Romania.
Also you can admire the “Arcul de Triumf” – a monumental gate which commemorates the victory of the Romanian army in the World War I.
Optionally you can dine in one of the restaurants in town, with traditional Romanian food.
Bucharest accommodation.

After breakfast, at 09:30 we will start our journey toward Brasov. On our way, we will make a stop at the famous Peles Castle in Sinaia, which was once the summer residence of the Royal family, known for its great architecture. Along time, the castle hosted many personalities of the times: writers, musicians, kings and queens. Time for visiting: 2 hours.
We can have lunch at a restaurant in Sinaia or we can continue the trip to Bran Castle. 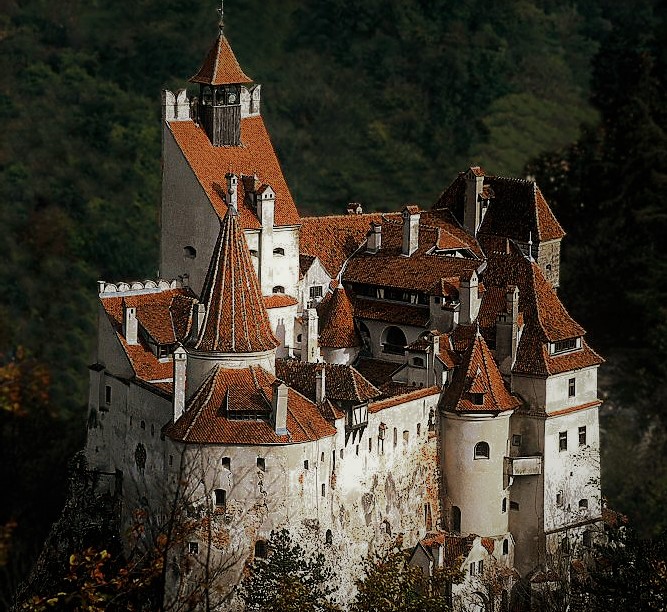 Castle known worldwide due to Dracula’s legend, the bloodthirsty vampire. There are many legends about this mysterious king, known for his ambition to impose honesty and order. Almost any crime, from lying and stealing, to killing, was punished by impalement. Being sure of the effectiveness of its laws, the legend says that Vlad III left a golden cup at sight, in the central square of Targoviste. The cup was being used by thirsty travelers, but had to remain in place. According to historical sources, during his reign, the cup was never stolen and remained almost unused.
After you visited Dracula’s home, we head toward Brasov, a city full of history and mystery. Medieval catacombs, secret tunnels, passages for hiding food under Piata Sfatului (Council Square), the vast lake beneath Tampa’s Mountain, and Solomon’s treasure, are the most popular myths of Brasov. These myths have been told over the centuries by word of mouth, generation after generation, until nowadays.
Brasov accommodation.

After breakfast we will visit the sights of Brasov: Black Church, The Council Square, The White Tower, The Black Tower, The Smiths Bastion and The Weavers Bastion. After visiting this beautiful medieval town we head towards the only inhabited medieval citadel today, Sighisoara. A beautiful city with a history of thousands of years, where romanians, hungarians and germans are living together. The fortress and the city were built since the Middle Ages certified since 1208. This fortress is inhabited even today, within its walls feel you can feel the scent vibe of those ancient times. You can recreate the atmosphere XIV-XVIII centuries, traditions that can not be found find anywhere else in Europe. We mention only the house where was born the legendary character “Vlad Dracul”, but to understand the historical significance of the places, leave you the pleasure to discover the other secrets.
In order to maintain the beauty of this amazing place, we dine at a restaurant located inside the citadel of Sighisoara.
Sighisoara accommodation.

After breakfast we go to the most representative city in Transylvania, with an incontestable cultural value, the European Cultural Capital in 2007 – Sibiu.
The legend says that Sibiu (or Cibinum) was once a poor village, where people were living from day to day. One day, a skilled craftsman came into the city. The local inhabitants were satisfied by his work, and they proposed to give him a piece of land, in order for him to stay. The sly merchant said that he will accept as much land as his buffalo skin can comprise and the villagers agreed. He cut thin strips of leather, covering a very large area of land. As the citizens of Sibiu are trustworthy people, they accepted the deal at the end of the day. With this piece of property the craftsman contributed to the village development, as he brought here other handicrafts-men.
Historically speaking, Sibiu is known before the year 1200 a.C., after being colonized by the Saxons, and named “Hermannstadt“. It was declared town in 1366.
The legend intertwines with history, and from the XII century, many Saxons came, most of them artisans, later organized themselves into guilds, contributing to the welfare of the city.
Sibiu accommodation.

After breakfast we can visit the largest outdoor museum in Europe (100 hectares) – Ethnographic Museum Astra – museum of Saxon ethnography and popular art, and other attractions: The Grand Square of Sibiu, Brukenthal Museum, Evangelical Cathedral, Orthodox Cathedral, The Roman Catholic Church, The Bridge of Lies, The 8 towers of Craftsmen.
We recommend you to take the lunch in one of the traditional Saxon restaurant.

Further we will follow a route through the spectacular Olt Valley, admiring the landscapes, as an invitation to return to Romania, since we showed you only a small part from our treasures.

Tours are organised for groups of minimum 18 persons. For inquiries please contact us.